Dr. Timothy Park (President of EWC), Dr. Steve Eom (General Secretary of EWC), and Dr. Daehak Lee (Director of EWC Korea) visited a church in Novosibirsk in response to the invitation from the bishop Vitaliy Maksimyuk. He has showed us a great interest in missionary movement among Churches in Russia since attending the 11th convention of the Asia Missions Association, 2013. He organized a mission school, which is possibly the first missionary school in Siberia and invited us to teach there. The school is consisted of 25 people, most of whom are the staff and leaders of the Covenant Church. We gave 13 lectures from 9 am to 5 pm for 4 days from March 4-7. On Saturday, more than 100 leaders from the cell groups joined the program and learned the missionary purpose of the church. On Sunday, Dr. Park preached a sermon, “A Church for All Nations” to more than 1,000 people who attended the Sunday Service.

Novosibirsk as the capital of Siberia is the third most popular city in Russia after Moscow and St. Petersburg and located in the middle of Russia. Though the Baptist churches have been there for a long time and are still strong, Pentecostal and Charismatic churches are growing enormously. The Covenant Church we taught in has more than 1,000 members, making it one of the fastest growing Charismatic churches there. 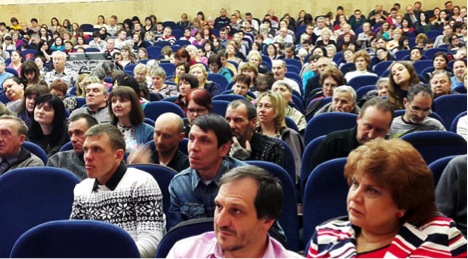