REFUGEE AND MIGRANT
Although it is becoming increasingly common to see the terms ‘refugee’ and ‘migrant’ used interchangeably in media and public discussions, there is a crucial legal difference between the two. Confusing them can lead to problems for refugees and asylum-seekers, as well as misunderstandings in discussions of asylum and migration.
Refugees are specifically defined and protected in international law. Refugees are people outside their country of origin because of feared persecution, conflict, violence, or other circumstances that have seriously disturbed public order, and who, as a result, require ‘international protection’. Their situation is often so perilous and intolerable, that they cross national borders to seek safety in nearby countries, and thus become internationally recognized as ‘refugees’ with access to assistance from states, UNHCR, and relevant organizations. A person is a refugee because of the lack of protection by their country of origin. Moving to a new country of asylum does not change this, so it does not affect a person’s status as a refugee.
Migrants may move to improve their lives by finding work, or in some cases for education, family reunion, or other reasons. They may also move to alleviate significant hardships that arise from natural disasters, famine, or extreme poverty. People who leave their countries for these reasons would not usually be considered refugees under international law.
Current estimates showed that there are 244 million international migrants globally (or 3.3% of the world’s population). While the vast majority of people in the world continue to live in the country in which they were born, more people are migrating to other countries, especially those within their region. Many others are migrating to high-income countries that are further afield. Work is the major reason that people migrate internationally, and migrant workers constitute a large majority of the world’s international migrants, with most living in high-income countries and many engaged in the service sector. 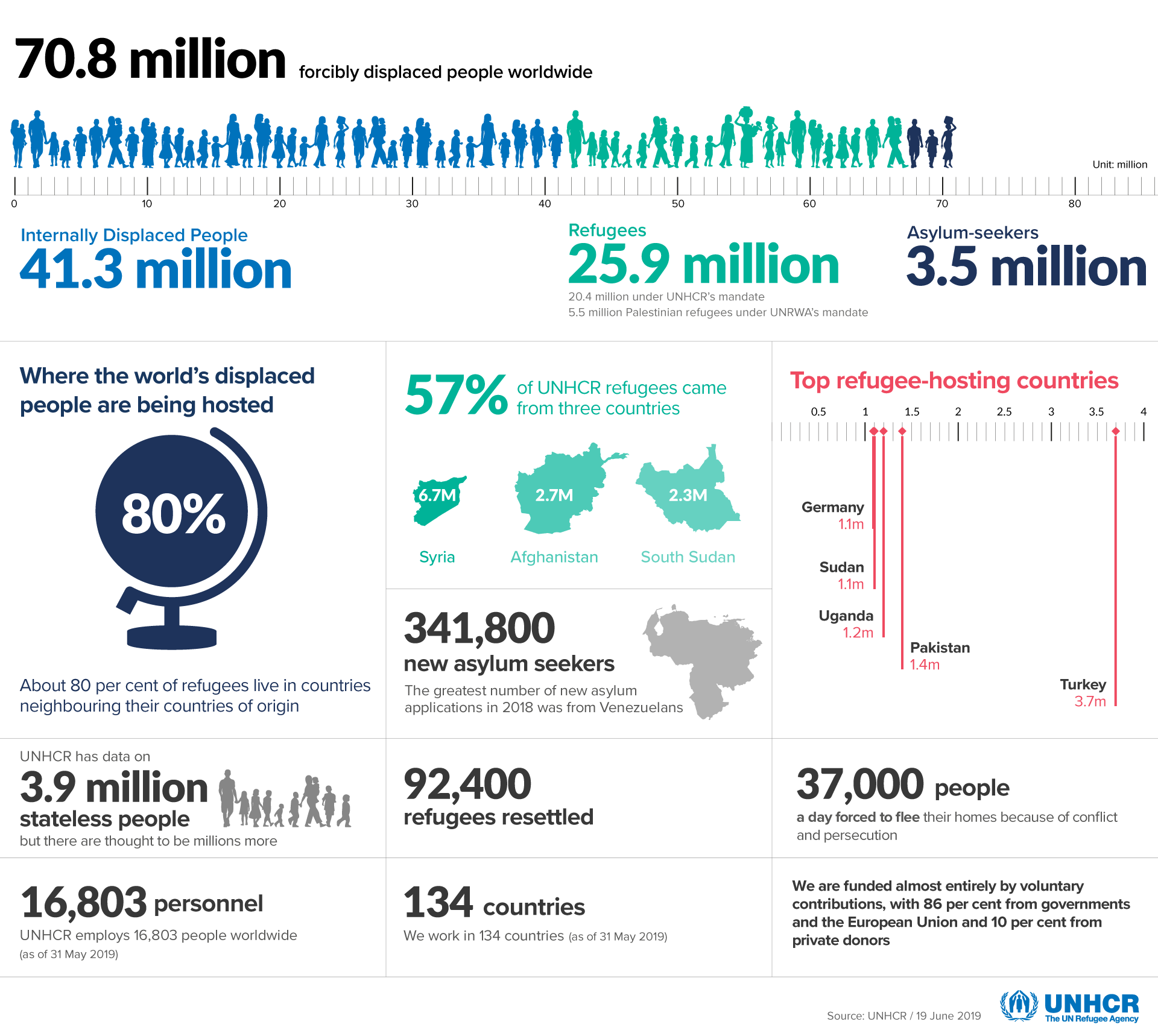 IDP, STATELESS, ASYLUM
An internally displaced person (IDP), is someone who has been forced to flee their home but never cross an international border. These individuals seek safety anywhere they can find it—in nearby towns, schools, settlements, internal camps, even forests and fields.
Countries with some of the largest internally displaced populations are Colombia, Syria, Democratic Republic of the Congo and Somalia.
41.3m IDPs, which 10m people around the world are stateless (someone who is not a citizen of any country) or at risk of statelessness largest group that UNHCR assists. Unlike refugees, IDPs are not protected by international law or eligible to receive many types of aid because they are legally under the protection of their own government.
There were 1.7m new asylum claims in 2018. When people flee their own country and seek sanctuary in another country, they apply for asylum – the right to be recognized as a refugee and receive legal protection and material assistance. An asylum seeker must demonstrate that his or her fear of persecution in his or her home country is well-founded.

ASYLUM SEEKERS IN HONG KONG
According to immigration authorities, there were about 14,000 asylum seekers in Hong Kong in 2018, more than half with pending claims or appeals. There were 1,600 in jail having fallen foul of the law, and another 1,600 waiting to leave Hong Kong.
The United Nations High Commissioner for Refugees (UNHCR) Hong Kong says there are about 7,000 people claiming protection from persecution or torture currently in the city. Hong Kong does not grant asylum as it is not a signatory to the 1951 UN Refugee Convention. But it offers non-refoulement, the assurance that asylum seekers will not be sent to a country where they may be persecuted or tortured.
As of February 2018, there were almost 5,000 non-refoulement claims pending initial screening. Almost four in five claimants were male, mainly from Pakistan, India and Bangladesh. Those who succeed in their non-refoulment claims and are recognized as refugees are referred to the UNHCR for resettlement in a third country.
However, less than 1 percent only succeeded. Immigration Department statistics show that between 2009 and 2019, only 160 out of 21,285 claims were successful due to the small number of resettlement countries offering places to refugees in Hong Kong.
Some non-government organizations and lawmakers have criticized the delays and urged improvements to the living conditions of asylum seekers. There have also been calls to let some of these foreigners work while awaiting the outcome of their appeals.

HONG KONG CHRISTIAN REFUGEE MINISTRIES
A charity Christian Action insists the Hong Kong welfare payments for refugees are not enough to survive on in one of the most expensive cities in the world. Justin Murgai, the charity’s manager of its Centre for Refugees, based in Chungking Mansions, Tsim Sha Tsui, since 2004, said about 90 per cent of their clients had been found to suffer severe anxiety.
An ordained Presbyterian Church minister, Judy Chan, is the Executive Secretary for Communications at the Hong Kong Christian Council and a member of the Hong Kong Refugee Ministry Group. Her book No Strangers Here: Christian Hospitality and Refugee Ministry in Twenty-First-Century Hong Kong offers Christian hospitality and the Hong Kong experience as one hopeful response to needy strangers at our doorstep. It is a welcome theological and practical resource for refugee ministry in the twenty-first century.

ETHNIC MINORITIES IN HONG KONG
Hong Kong is a largely homogenous society, with about 92% of its people being Chinese (ethnically speaking, Han Chinese). The 2016 Population By-census found (by way of self-identification) that there were about 584,383 non-Chinese people in Hong Kong (excluding some 390,000 foreign domestic helpers), or about 8% of the population. Not all members of the non-Chinese groups are permanently settled in Hong Kong. 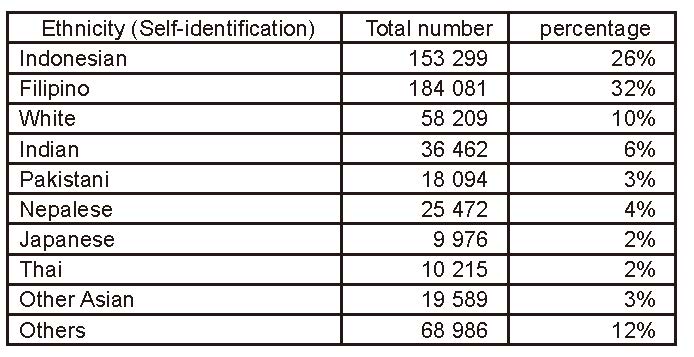 About 30% of them (about 80,000) are South Asians (including Indians, Pakistanis and Nepalese). Like Hongkongers, generations of Ethnic Minorities (EM) have established their roots in Hong Kong with many of them born and bred here, calling the city their home. EMs have largely achieved self-reliance through employment and their Labour Force Participation Rates (LFPR) are relatively high. The LFPR of male EMs is about 79.9% (which is higher than that of the overall male population of 69.7%), while the LFPR of female EMs is about 51.2% (which is on par with the overall female population. It is worth noting that female Nepalese maintains a high LFPR of 63.2%). As an important source of manpower supply for Hong Kong.

MAINLAND CHINESE MIGRANTS IN HONG KONG
The one-way permit scheme, which allows up to 150 mainlanders each day to move to the city, is meant to help spouses and children born across the border reunite with their families in Hong Kong. Close to 950,000 mainland ¬migrants moved to the city via the scheme as of end-2016, making up about 12.8 per cent of Hong Kong’s population. More than 70,000 have come under the “Mainland Talents and Professionals” scheme, which has been implemented since July 2003, and 200,000 were children born here to two mainland parents. The rest are wealthy capital investors, spouses of Hong Kong people, students who have stayed on after graduating, and others who have come under a variety of visas. Many things have changed since Hong Kong returned to China on July 1, 1997. The city has gained 1.5 million new citizens from the mainland – they account for 20 percent of the population.

HONG KONG CHURCHES AND MISSIONS
According to The Report on 2014 Hong Kong Church Survey conducted by Hong Kong Church Renewal Movement (HKCRM) listed official membership of Protestant churches as 560,547, with 327,112 present in Hong Kong and 305,097 on average in weekly worship. The Protestant community is composed of at least 1,287 Chinese-speaking churches and 60 English-speaking churches in Hong Kong. The average weekly English-speaking attendance of worship services was 28,356 people. Its largest ethnicity group among the congregation was Chinese/Hong Kong, taking up 48.5% of total attendance. The second and third large ethnicity groups were Asian (34.3%) and Caucasian (10.1%) respectively. 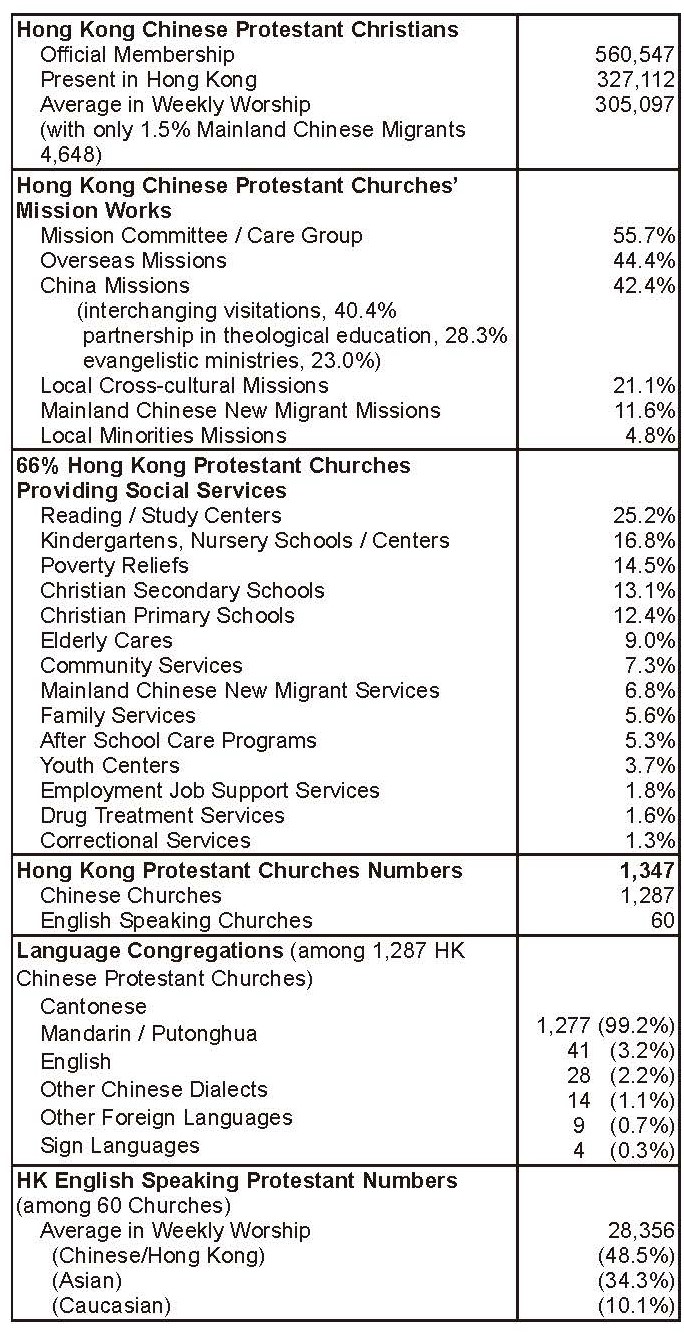 PRAYER NEEDS FOR HONG KONG
Why is Hong Kong in such an uproar? Why People are taking to the streets? The extradition bill which triggered the first protest was introduced in April. It would have allowed for criminal suspects to be extradited to mainland China under certain circumstances. Opponents said this risked exposing Hong Kongers to unfair trials and violent treatment. They also argued the bill would give China greater influence over Hong Kong and could be used to target activists and journalists. Hundreds of thousands of people took to the streets. After weeks of protests, leader Carrie Lam eventually said the bill would be “suspended” indefinitely.

How did the protests escalate?
Protesters feared the bill could be revived, so demonstrations continued, calling for it to be “withdrawn” completely.

In September, the bill was finally “withdrawn”, but protesters said this was “too little, too late”.

What do the protesters want?
Some protesters have adopted the motto: “Five demands, not one less!” These are:

The fifth demand, the withdrawal of the bill, has already been met. Some also want the resignation of Carrie Lam, whom they view as Beijing’s puppet.
Protests supporting the Hong Kong movement have spread across the globe, with rallies taking place in the UK, France, US, Canada and Australia. In many cases, people supporting the demonstrators were confronted by pro-Beijing rallies. Chinese President Xi Jinping has warned against separatism, saying any attempt to divide China would end in “bodies smashed and bones ground to powder”.

What is Hong Kong’s Status?
Hong Kong is a former British colony handed back to China in 1997. It has its own judiciary and a separate legal system from mainland China. Those rights include freedom of assembly and freedom of speech.
But those freedoms – the Basic Law – expire in 2047 and it is not clear what Hong Kong’s status will then be.

PRAY FOR HONG KONG, THE CHURCHES AND CHRISTIANS
Continue to be the Peace Makers (praying and hymns singing)

Hong Kong’s Christian Protesters Come Armed with Hymns.
“Christians were among those taking to the streets. Churches have become temporary support centers. The hymn ‘Sing Hallelujah to the Lord’ has become the unofficial protest anthem for Christians and non-Christians. As clashes erupted between protesters and police over the weekend, some Christians tried to reduce tensions between the two sides by standing between them.”

Grant us Wisdom to “Protect our Children”
Protecting Hong Kong’s Young Protesters.
“As Hong Kong’s protests deepen, one pastor and a group of mostly Christian volunteers are trying to stop clashes from happening. Protect the Children volunteers put themselves between protesters and police in a bid to mediate. But it’s getting more difficult as clashes break out earlier in the demonstrations – and the volunteers have inevitably found themselves drawn into the escalating violence.”

Continue to be the Witness of Christ to Influence our People
The influence Christianity to Hong Kong has had over the past 178 years. Starting in the 1960s, there was a boom in church-run education that roughly 50 percent of the city’s primary and secondary schools are run by churches. Research by the government’s University Grants Committee has found that nearly 25 percent of Hong Kong’s university students are Christian—mostly Protestant—which is remarkable considering that Christians account for just under 12 percent of the city’s population.

=================
K.Y Cheung Teng
kycteng@gmail.com
Dr. K.Y Cheung Teng received her M.A. (Mission), from Trinity Evangelical Divinity School, U.S.A., (1999) and her D. Min. (Missiology), from the same school in 2006. Currently she is an associate professor of Intercultural Studies at the Alliance Bible Seminary.